Why this Farmer Protest is nothing but a PROTEST TOURISM?

It's all in the air. Everyone wants to witness 'history being created' at the 'border'. Go travel in your SUV, savor the Langar, clap and sing songs, 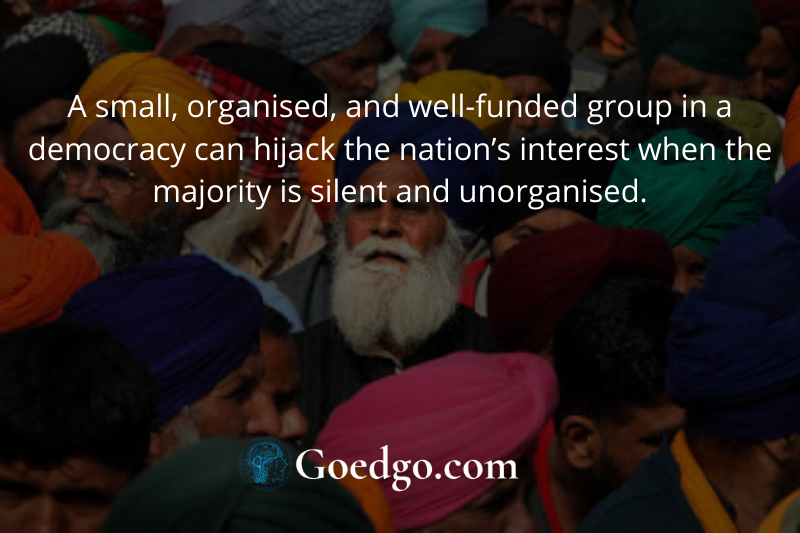 THE REAL CAUSE FOR PROTEST

It's all in the air. Everyone wants to witness 'history being created' at the 'border'. Go travel in your SUV, savor the Langar, clap and sing songs, spew venom on 'Modi', click pics for Insta, give few sound bites to media, and come back. And the youthful will return with a swag in their swanky cars, leaving behind the poor, gullible, uneducated, golden bearded old farmer to spend the night in cold winter under the tractor trolley. So much for the adventure seeking, fun loving, 'history making' youth of Punjab.

Meanwhile the situation in rural Punjab is pathetic. Everyone knows how much damage is being done to soil of Punjab  due to repeated and ecologically unsustainable practice of sowing Wheat - Paddy cycles. How much adversely it is affecting the ground water pollution due to repeated misuse of pesticides. Look at the rise in cancer cases. . Only two reasons. . Pesticides and radiations. Punjab is slowly turning into desert owing to deepening groundwater situation. By 2045 most of the land in Punjab and Haryana will be semi desert as per Central Ground Water Board. There is no crop diversification.

Current farming practices are completely unsustainable. There is frankly NO leadership to highlight the real issues of Punjab. All the scientists in PAU are keeping their eyes closed. No one wants to bell the cat. Scientists in Punjab are happier to insult the Govt by not accepting awards, but will not highlight the real issues of soil infertility or the need for crop diversification. And in the meanwhile no one is growing oilseeds to cater for the deficit of 15 MT of edible oil worth Rs 70,000 crores in import bills.

These Protests are being supported by almost all political parties. Do you think these discredited politicians will ever come together to save the common man ? Has it ever happened in political history of India ? The ulterior aim is to Primarily to save the Age old Corrupt Artiya - Politician regime exploiting the hard toil of the farmer . And to continue unsustainable wheat paddy regime in Punjab irrespective of harming the ecology and burdening the economy in every way !! And the irony is that the same innocent farmer is being used as cannon fodder to fuel the agitation by the very perpetrators who are exploiting him. What a clever, master political stroke.

So what you have is roadblocks, bandhs, protests in the name of farmers without aligning the national farming needs or educating the farmers in real issues that we collectively face today. And the silent citizens, including the judiciary, is helplessly watching a nation held at ransom, knowing fully well that such a sustained blockade is deemed as an act of war in international law.

BJP The ruling party could not articulate their efforts, policies whereas the opposition parties are doing that with ease. Can spread rumors, incite, create chaos & violence easily by brainwashing. These innocent people too are swayed easily. Modi Government need good spokespersons like YOU.

Here are the list work done by Modi Government, If someone asks what efforts Modi has made to double the income of "farmers" by 2022

More
And More
And More
missing few more. Only "middlemen" and "brokers" are opposing Modi because he is empowering the "farmers" of the country.

Where Does All Our Money Go? | Home Budget | Personal Finance